This is the Shaolin Temple in Henan, China

Chinese Martial Arts
Chinese Martial Arts or Wushu is known all over the World as an important part of Chinese Culture. Wushu contains of both boxing and weapons; all in a nice philosophical setting. From the Philosophy, Martial Art has absorbed fundamental amounts of knowledge. This is specially seen through the close relation between heaven, man and earth. As seen through the Ancient tradition of retreating back to nature for Quietness and to Practise Martial arts. The closeness to nature can also be seen through the variation of forms/ katas according to season and nature. Interrelations of Cosmos or Macro cosmos reflects in Micro cosmos were sees as the essence of everything. Man is a part of Nature. Relations to Nature can also bee seen through the Origins of Wushu who according to the Sagas started in the Prehistoric age when man and animals were living side by side. Both struggling over the same food supplies and regularly confronting each other. Gradually man developed methods of fighting now called Wushu.

Within Wushu the focus is often directed toward form and spirit. The goal is to capture the moods and expressions not to copy the actual original. This is why Wushu developed as it did through focusing on jing, qi and shen; meaning the inner essence, vital energy and Spirit. Only through cultivating our inner mental aspects and simultaneous external physical aspects you can achieve to become a Martial Artist.

Dianxue
Within Chinese Martial Arts we find a huge variety of different Wushu styles. One of the most hidden styles, but at the same time most famous ones is Dianxue or Acupuncture point tapping. Dianxue have in more modern time become more famously known as Dimmak and Darmak. Through manipulating with these acupuncture points you can manipulate the body to get trombosis, paralysis or even cause Death. According to the Chinese tradition it is needed to gather the internal force or Neili to be able to access the energy (qi) within Dianxue.

The Shaolin history
Chinese Martial Arts have its roots in the Shaolin temple; and is often been regarded as the Mecca of Martial Art. The temple is located in the Songshan mountans, mid-China, Dongfeng County in the Province Henan. The Temples history starts in year 495 when the Emperor Xiao Wen. The Emperor built the temple to be a house for visiting Indian monks in the Northern Wei era.

Most of the monks in the Shaolin temple are trained in Wushu before entering the Monastery. The reason of entering the monk order was actually to become more skilled in Martial Arts. This has through the last 1500 years made the Temple to accumulate knowledge of different types of Wushu. In addition to the naturally acquired knowledge about Marital Art have the Abbot of the Temple decided to send monks to different parts of the world to collect knowledge. Through the centuries this has made the Shaolin Temple and its Warrior monks a legend.

This is a painting of Bodhidharma

The Shaolin legend – Bodhidharma
Year 495 the Emperor gave the monk with the name of Ba Tuo a gift. The gift was the land where he built the Shaolin temple. But it would last about 25 years before it get some importance. The Shaolin temple was founded in year 495, but in year 520 during the Southern Dynasties it become drastically changed by a Indian monk called Bodhidharma or Damo in Chinese. This monk it is usually considered to be the founder of kung fu movements based on animals and the focus on muscles and joints. Today we find that the Shaolin temples traditions is still keep the traditions of Bodhidharma alive. Some consider him as a myth as the founder of kung fu since it has always been a tradition within a monastery to train Martial Arts to protect the monastery valuables as a type of self defence.

The legend goes as follows. In year 520 a Indian monk arrives in China. This monks name were Bodhidharma. Shortly after arriving in China he had a meeting with Emperor Wu of the Liang Dynasty. They did not have any good chemistry and everything ended with that Bodhidharma left for the Shaolin temple in the Songshan Mountains.

He selected this specific temple because it had a reputation of a strong Buddhist belief. After entering the temple he realise that the monks were in trouble. They were in bad shape and could not keep up with him. So, Bodhidharma leaves for a stone cave in the mountains close to the temple to meditate alone.

In his cave he starts to see interesting aspects in the movements of animals. Shortly after his copy their movements and thereby creating among others snake boxing and crane boxing. Through the following nine years he created in total of five animal styles: Snake – , Crane- , Dragon-, Tiger- and Leopard boxing. After passing on this new knowledge he becomes famous as the founder of the five boxing arts of Shaolin Kung fu. Through this exercises the monks get fit again. After this it become a tradition in the temple to practice Martial Art. By this the Shaolin Temple becomes the centre of Wushu in China. As a manifest of this importance it is said that Bodhidharma wrote the two famous Martial Art books: Xi sui jing (The marrow Cleansing Principles) and Yi jin jing (Sinew Transforming Sutra). 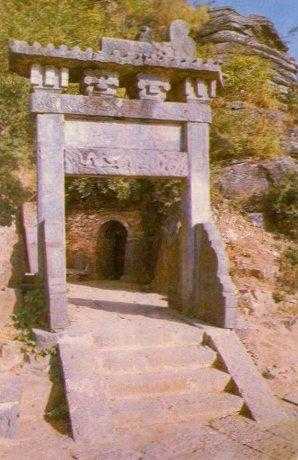 This is the cave at the Shaolin Temple in Henan

The temple had its up and downs for 1000 years. During these years the Martial Art in Shaolin grew stronger. Everything started to decline in around year 1800. Everything ended in a way in 1928 when the temple was buried by a warlord. 32 years later the Peoples Communist party outlawed the Practise of Martial Art, and on top of everything the Shaolin temple was burned again. Only three monks remained in the burned temple; soon after they were put in jail for a period for showing defiance. In 2006 two of them were still alive. Today the Shaolin temple has been rebuilt again. And thousands of Practitioners of Martial Arts now live in the temple and in the sounding areas.

Shaolin kung fu
In total there are 172 routines within Shaolin Kung fu in addition to the extensive weapon routines. In ancient times there was a lot of weapons and recordings of techniques carved into stone and wood. Shaolin Kung fu is a term for the many martial art skills practised within in the walls of the temple. It is said that more than 50 branches of kung fu is thought. As of studying this art of the many styles it is estimated that a minimum of three years to master the basics. In total it is said that we should estimate in total of 12 years of dedicated training to start mastering Shaolin Kung fu.

The Life as a Monk
Every morning the monks are awaken by a bell at 04.30. The goal about waking them up so early is to make them meditate until 06.00 when the morning exercise starts. The first exercise is running. On a normal day they run up into the mountain nearby. They are expected to run a minimum distance. At 07.30 the monks have their first meal of the day, breakfast. At 09.00 to 11.30 they start with their basic Martial Art exercises. The first year it is normal to focus on the core basic techniques as stances, jumps, kicks and strikes; this to master the essence of all techniques before moving on. Lunch and a short nap follow this exercise. At 14.30 it is back to training until 17.30 after this follows food and early sleep. For some students it is possible to have some advanced training at night time; because the next day also starts at 04.30. 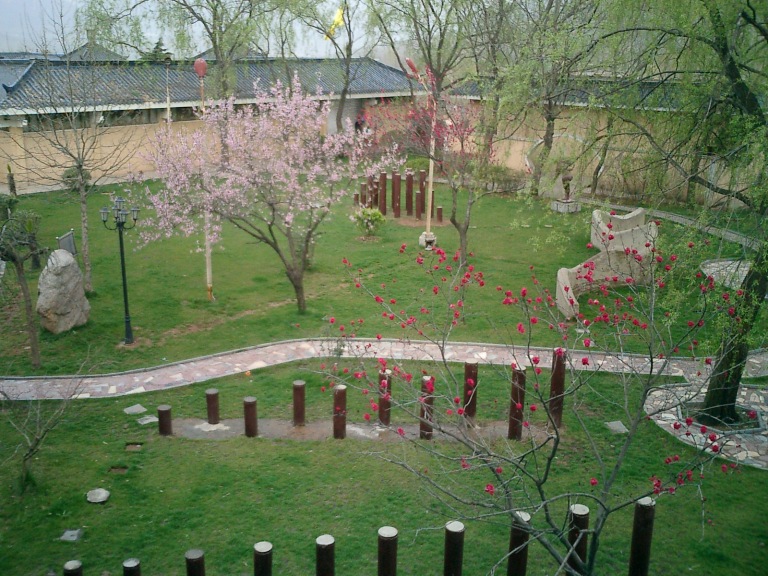 This is the grounds at the Shaolin Temple in Henan

Shaolin temple today is actually two temples. One is the tourist Shaolin and the other one is the Ancient Shaolin. Location is the same, but life is totally different. Old Shaolin is starting at sun rise and stops at 10.00 when the temple gate opens to tourists. Then it is busses of people coming into the area to see the famous Shaolin temple. This continues until the afternoon when the hole stops. Again we see the locals come out of their hideouts. Monks start training openly and the Disney World impression changes for the respectful traditional temple of Martial Arts wakes to life again. Mush can be written about the necessity to commercialise the temple like this. I think that it is needed for a period to get money to rebuild the temple, spread the message of Shaolin Kung fu and finally but not last to Develop. In Chinese philosophy it is needed to have movement; stagnation is death. The monastery has gone from a 1500 years history to aches. Now it rise from aches and flourish again. The way to make this possible is through tourism and students. It is respectful for the temple to try to move on. It looks as they manage… 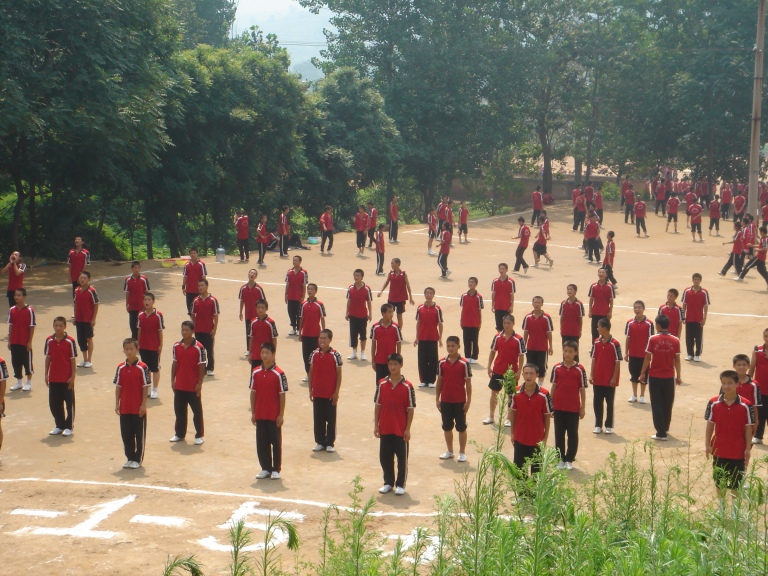 This is Warrior munks meditating