Tactics and Special operations
As you might have noticed recent years with the terror attacks in Paris against the newspaper Charlie Hebdo, København in Denmark, Utøya in Norway, at multiple schools in USA and multiple places around the world paints a picture of an increasing trend. We might find our self to become a target for a terror attack; not only suicide bombs, but also knife attacks, guns and chemical weapons. The essence of a terror attack is the purpose to create a sensation of Fear in people, to make us do – or not do something. Terrorists normally do not want to take people hostage, kill and hurt as many as possible in a short time lap.
We cannot predict exactly when or where it will happen. We only can predict that it will happen again and again. We need to be prepared. Suddenly you hear shots, you see people die, and then it is basically over. An estimated average time for a terrorist attack is less than 15 minutes; more close to five minutes. Let us take you through some steps of terrorist prevention tactic.

Monitor
We need to monitor if a threats exist, from whom and where. It is normal to see threats in actions of organizations, religious groups, and fanatic – and mentally disturbed people. When we use the word “monitor” we mean that we evaluate and observe our security based on this type of threats. To jump to the conclusion, people need to be limited from having free access everywhere. Free access is a gift to terrorists. To limit free access we will meet some new dilemmas. Because on what basis will the access be limited? Remember the chance for terrorist attacks are very low, and the chance for them to be terrorists is even lower, but the chance for agitation in the general population is relatively high. To exclude people, groups of people, or segments is not the way to aim neither. What we should do is to develop ways to monitor and to revise people in the risk group (whatever it might be); think about the security in airports. Two important key words: Monitoring and Revising people.

We need to have a terror plan and exercise about what to do if we are exposed to a terror attack; call it Terror drills. The plan consist of two parts: accommodating the facilities and training of the people. That is why events and buildings should be accommodated in such a way that it becomes easy to monitor all people entering the premises. It has to be a certain distance from the point of entrance to where the activities are arranged. Making an eventual happening at the filter at the point of entrance create a time frame where people inside might escape or take some action. It is two important points of interest exactly here: First, the people need to have alternative escape routes to a safe area. The area need to be adjusted with objects that would increase the time from the filter. This might be an extra door (useless), an elevator (slow), or something that will make the terrorist use longer time to reach the point of confrontation. The longer time the terrorist uses from filter to potential point of confrontation the bigger chance for escaping. Installations should be armed with alarm buttons, code words and routine codes (Ex. fixed normal patterns of movement and places to speak). All changes from normal SHOULD create an alarm. When that alarm sound people should move FAST out or to a special panic room. We need to train and train and again train to make this more time efficient. Just remember that a crisis will not increase our skill level, in crisis we will sink to our level of training. We need to train HARD and realistic before it happen. Remember that before the police enter with the proper resources you are alone! Complete alone… and about 60% of the incidents are actually over BEFORE the police come. You need to prepare yourself to face the worst thinkable ALONE. Decide to make plans against sniper, shooters, bombs, fire, chemical attacks and knife attack; groups and single persons, hostage situations. Most of the plans will be identical, but you need to make them. Go through different scenarios and decide what to do. Then you and the people around you need to train in what to do.

The most likely scenario is shooter events. This is a person entering and simply starts shooting on everybody; killing all and everybody present. Victims are chosen on random, if you are present you might be shot and the shooter terrorist is very unpredictable.

Interesting Shooter facts from FBI
More than 165 shooter incidents the last 10 years with about 500 killed and over 600 wounded in USA only. Shooters are an increasing trend in especially in the USA. 40% of the shooter incidents might classify as mass killings (3 or more killed)! 70% of incidents happen in commerce, business and educational environment (often students are the shooter). When we have a shooter we might predict him to be totally alone out doing some type of emotional vendetta. The shooter is normally male; female shooters are more exceptions. It is interesting to know that a shooter normally kill one of his family members in his house before starting the final mass murder. Another aspect that often repeats are the fact that 40% of the shooters commit suicide; 23% before the police arrive and 11% after the police arrives, but before the police do anything. Normally they kill themselves on the site of the mass murder. In 70% of the cases everything finishes in less than 5 minutes, and 50% less than 2 minutes. The shooter decides to stop shooting himself in 56% of the times. 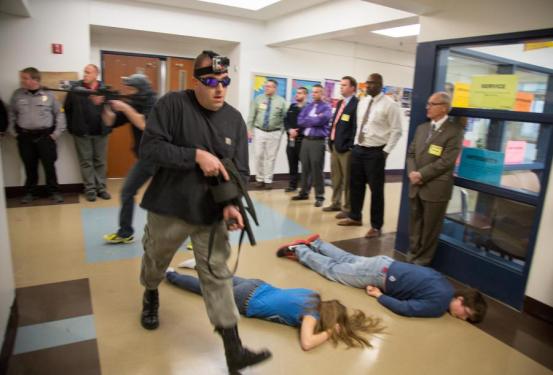 To sum up: It is found that shooters often first attack his own family or persons in close relation at one site before moving on to the main site (16%). In 10% of the cases we find family members and close persons being killed, but more frequent just wounded. The shooter tends to be more violent if he is trigged by a failed romantic relationship. Often the shooter might have a type of revenge on previous couple as motive. An average shooter has an external motive related to lost love, and then they seek revenge on a public location with a lot of people to create the most damage possible. First the shooter, go after “the loved one”, then he moves on to another more populated place, most likely an area of commerce where pedestrian has full access, or an educational environments (governmental schools and open school areas). Random people just passing the area with no relation to the shooter are in risk of being shot. The area is handpicked for that sole purpose – easy kills. The shooter does not work in the incident area (68%), but sometimes he had a relation with a worker there. Normally the shooter will commit suicide before the Police arrive or shortly. If the shooter worked in the business he is likely to select the busiest day. In schools we find that the shooter always has a type of connection. On an average the shooter kills or wound 4 persons per minute. 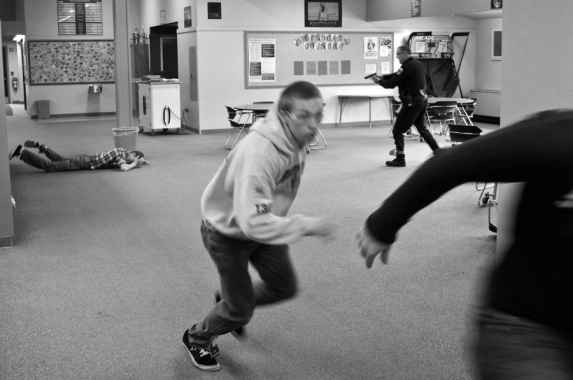 In old times we found the police put up a parameter of security and called for a negotiator. Today they go directly in to the shooter to minimize the killings, because a shooter normally does not want to speak. Remember the shooter do not intend to survive this event. He is on a suicide mission, and his goal is to kill as many as possible on the site he selected. They tend go to places where a lot of people are gathered without any way to defend themselves. At first resistance they tend to kill themselves; as cowards.

The basic three Tactics
It is no time to lose dealing with terrorists. So, authorities normally recommend the following tactic:
1. Run
2. Hide
3. Action/ Fight

Run mean that if the action happens far away you should run for safety. Remember run fast and keep your hands visible (the police do not know who you are). Warn others about what is happening. Do not gather any place, get out and away!

Hide mean that if you cannot escape you should hide from the terrorist. Quiet and totally out of sight. Remember to reduce the sound on your cellphone! If possible close doors and put heavy objects in front of the door. Stay put, and if possible send a message to somebody outside about where you are.

Action means that you contact authorities and give them information about the terrorists. How many, where they are, what type of weapons, their intentions, their clothes and other information that might be important. If you have photos or video send it out. The police need all the help possible. The other side of action is to not provoke the terrorist, but if you see no other option exist… Attack! If you attack you need to give everything. It is no turning back when you attack. Use adjusted weapons in your attack. For example put the tip of a pen deep inside the eye of the terrorist. Throw boiling coffee in the face of the terrorist. Push the terrorist down the stairs. Hit the terrorist with an extinguisher in the head. You are fighting for your and others life.

Remember when the police come to the site of terror they are not interested in helping you. They want to stop the terrorist and that ONLY! They do not know if YOU are a terrorist or not, making you most likely to be treated as one in the first minutes. Be cooperative, stay out of their way, keep your hands visible, do not scream, and follow instructions. Do not complicate the work of the police. They will enter very focused in a diamond formation. Do not distract them. Stay down!

Check list when Shooter:
RUN
– If you can get away – Run!
– Others opinion is NOT important for you trying
– Help others to run away
– Stop others from entering the danger zone
– Call Police

HIDE
– If impossible to get away – Hide!
– Stay quiet. Turn off sound on telephone!
– Close the door and Turn off lights
– Put heavy objects in front of doors
– Hide behind heavy objects that might resist bullets
– Try to have free movement where you hide
– Call Police

FIGHT
– If your life is in danger – Fight!
– Take down the shooter
– Improvise weapons
– 100% commitment
– Kill if needed 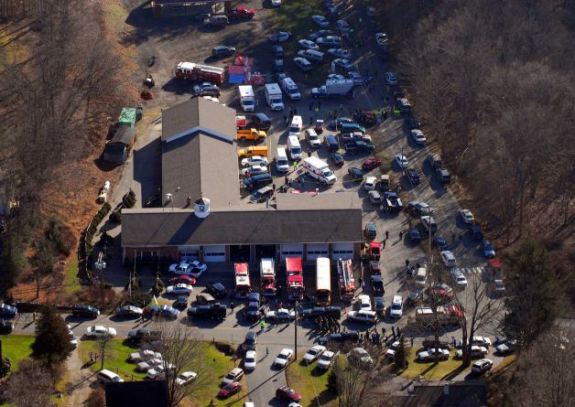